Scientists build the most sensitive carbon nanotube-based photodetector to date. The material is sensitized with CN3NH3PbI3 perovskite nanowires, which propel its responsivity by almost seven orders of magnitude. 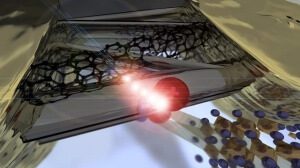 The team at Cheap Tubes loves to learn about cutting edge research in Nanotechnology and we use this forum to pass along recent developments to people on our email list! Carbon Nanotubes and Nanowires are two of our main product lines.  EPFL is a long time client and we are fascinated to see them pushing the envelope with this revolutionary new device architecture. The device performs three-state logic operations, which can be used in digital optoelectronics, allowing multiple circuits to share the same output line.

“Semiconducting carbon nanotubes are often used in photovoltaic and optoelectronic devices. But light detection with pristine carbon-nanotube field-effect phototransistors so far is limited in the range of 10% quantum efficiency. The responsivity of the best carbon nanotube devices is around 0.1 A/W. Publishing in Nanoscale, EPFL scientists have now fabricated a carbon-nanotube photodetector with responsivity as high as 7.7×105 A/W.

The lab of László Forró, led by postdocs Bálint Náfrádi and Endre Horváth, at EPFL built the device and overlaid it with perovskite (CN3NH3PbI3) nanowires to sensitize its light-detection capacity. The unprecedented high performance is a result of the two materials working together: the perovskite nanowires can convert incoming light into free charge-carriers with high efficiency, while the carbon nanotube transfers the electrons to the detection circuit.

In addition, the team found that high-powered light can turn the normally conducting device into an insulator. This last feature means that the device performs three-state logic operations, which can be used in digital optoelectronics, allowing multiple circuits to share the same output line or lines.

The team recently developed elongated nano-perovskites, which caused a stir in the community of nanostructure-based optoelectronics. This work is an extension of that breakthrough, highlighting the versatility of these devices. “Our strategy of photosensitization by the perovskite provides a promising solution to this problem,” says Bálint Náfrádi.”

Scientists build the most sensitive carbon nanotube-based photodetector to date!