Carbon Fullerenes C70 98% Fullerenes are closed hollow cages consisting of carbon atoms interconnected in pentagonal and hexagonal rings. Each carbon atom on the cage surface is bonded to three carbon neighbors and it’s bonds are sp2 hybridized The Fullerene molecule can undergo a wide range of novel chemical reactions. They readily accept and donate electrons.

Carbon Fullerenes C70 are the third allotropic form of carbon material (after graphite and diamond). Fullerenes composed of less than 300 carbon atoms (endohedral fullerenes) are commonly known as “buckyballs”. The carbon fullernes C70 molecule can undergo a wide range of novel chemical reactions. It readily accepts and donates electrons. Please note – there  is no scientific evidence or permits indicating this material is safe for human consumption.

Carbon Fullerenes C70 are a series of hollow carbon molecules that form a closed cage. They are isolated by proprietary methods from the mixed extract (typically <80% C70) of carbon soot produced by a carbon arc operated under a sub-atmospheric helium environment.  HPLC analysis is included with sample and indicates the presence of all fullerenes including parent oxides.  Samples are vacuum-dried to remove residual solvent.  Typically, the hydrocarbon content is <0.5%. Pure sublimed crystalline powders and thin films are available to meet the  stringent absolute purity requirements for solid-state research.  Hydrocarbon content typically <0.01%

Fullerenes are the third allotropic form of carbon material after graphite and diamond. These were discovered in 1985 by Harold. W. Kroto, Robert F. Curl and Richard E. Smalley. Fullerenes consist of 20 hexagonal and 12 pentagonal rings as the basis of an icosohedral symmetry closed cage structure. Each carbon atom is bonded to three others and is sp 2 hybridized. The C70 molecule has two bond lengths, the 6:6 ring bonds can be considered “double bonds” and are shorter than the 6:5 bonds. C 70 is not “superaromatic” as it tends to avoid double bonds in the pentagonal rings, resulting in poor electron delocalisation. As a result, C70 behaves like an electron deficient alkenes and reacts readily with electron rich species. The geodesic and electronic bonding factors in the structure account for the stability of the molecule. Fullerenes can be used as organic photovoltaics(OPV), these are powerful antioxidants, reacting readily and at a high rate with free radicals which are often the cause of cell damage or death. Other uses of C70 like catalysts, in water purification and biohazard protection, portable power, vehicles and medical. 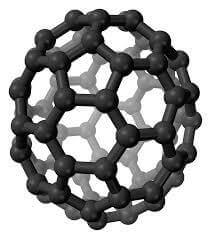