Thin Walled Carbon Nanotubes are well suited for  the ITO replacement films and conductive pastes markets.  With an all carbon structure and high aspect ratio, TWNTs provide a unique solution for these challenging applications.  Our TWNTS have been successfully used as a conductive pastes in televisions. The TWNTs-based Transparent Conductive Films can reach less than 200 ohm/sq sheet resistance with more than 80% transparency. Prices are per gram.

Thin Walled Carbon Nanotubes -TWNTs are produced by methane catalytic decomposition over Cobalt based catalyst (CCVD) and then are oxidized in an air atmosphere.  There is almost no amorphous carbon in this product.  TWNTs have a high aspect ratio which increases conductivity and mechanical properties.  Thin Walled Carbon Nanotubes have a high ignition temperature and the temperature can often reach 620°C before they burn off.  TWNTs can be used to make transparent conductive films or other research & industrial application. The TWNTs-based Transparent Conductive Films can reach less than 200 ohm/sq sheet resistance with more than 80% transparency.  Their purity is 90wt%, outer diameter is 3-5nm, & the length is 5-30um. 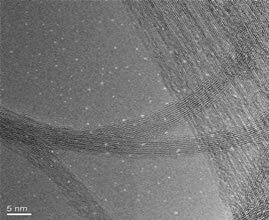